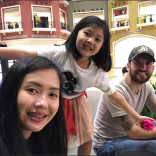 Should the men pay or should the ladies get the bill?

Perhaps the most dreaded part of any first date is when the bill arrives on the table. Everything was going so smoothly until now. The dating world has a lot of unwritten rules that people break all the time. They say the guy should always pay, while ladies nowadays prefer to cover the bill because it is the 21st century after all.

With that in mind, the question of “Do I go dutch or not?” passes the minds of those on a first date, especially for ladies.

For those who have never heard of the phrase before, “going Dutch” is a classic term used to describe a person paying for their own food and activities on a date.

The concept probably came from Dutch etiquette, hence the name. In the Netherlands, it is common to pay for yourself on a date. The slang term eventually caught on and although had a negative stereotype of being selfish in the beginning, is merely a definitive phrase today.

Old society vs. the new

Over the years, alongside the rise of feminism, the rules of dating have drastically changed. What was acceptable five years ago is now obsolete. What more the dating practices of our parents or grandparents? Case and point, things were much simpler before where a first date meant a walk in the park, a few cones of ice cream and much conversation. Today, things are more complicated, where women expect and are expected to be treated equally as their male counterparts.

The changes also affected the latter part of a date – the bill. Before, it was readily accepted and expected that the guy would pay. This old rule is perhaps the reason why “who pays what” became a complicated thing. The woman wants to prove that she can pay for herself because she is a strong, independent gal but does not know how to do it without hurting the guy’s ego. Meanwhile, the guy is sitting there wondering if he should be the classic gentleman and offer to pay the bill but is afraid he might offend the woman. He does want to make a good impression and hopes for a second date, after all.

To split the bill or not?

The answer is yes. Regardless of gender, one should go dutch on a first date. Ladies, offer to go dutch. It leaves a better impression on the guy when you do. The key is to do it with grace and subtlety. Yes, there are advised ways to split the bill, which we will cover later on.

Who knows, when there’s a second, third, and more dates to follow, then you are more comfortable to set an appointed person who will pay.

Why you should go dutch

The following are the reasons why women should offer to pay for their food or activities on a date:

Offering to go dutch will remove the “Uhm,” “so,” “ah” stage when the bill arrives. The dread for this part of the date disappears. You aren’t uncomfortable, and you can focus on the person in front of you instead. If the guy in front of you is your potential life partner, would you rather worry about the bill or getting to know him more?

There are those who feel guilty when a guy pays for their date, and there won’t be a second one. The feeling of owing him is there, even though you really don’t. To avoid feeling this way, better to offer to pay for your half. This way, you won’t feel bad about what you’ve ordered, especially if the restaurant you chose has your favorite comfort food on the expensive side so you can enjoy your meal without regret.

3. Even the playing field

In line with changing the dating rules, you two are equals and should, therefore, pay for yourselves. With this, no one is placed in a higher position of power or influence (very subtle but present concepts on dates), which is the best foundation for a developing relationship.

Offering to split the bill gives you the liberty to be yourself throughout the date.

This reason is simple. You offer to pay for your food or activities because you can. You are on a date, not for free food or movie passes. You’re there to get to know someone you’re interested in. You don’t need his money, so it’s best to make sure he knows that too.

The traditional guy always pays. A true gentleman takes care of his lady financially. These are stereotypes that must be broken. While many women are happy being taken care of financially, there is a steadily growing number of people out to break those norms.

Let’s say you’re all set about going dutch, but the guy isn’t. Offering to do so automatically breaks the pressure off his back. In cases like these, it is harder for the guy to offer to go dutch, so it’s our responsibility, ladies, to initiate.

6. To check his response

Another reason that isn’t so obvious as the others are to check for his reaction when you offer to pay. It might not be a deal breaker, but it can give you a glimpse into his character. If the guy offers to go dutch, then it shows he is confident enough to go against norms. If he says he never lets a girl pay, then that’s his personality. Alternatively, there’s the chance that offering to split the bill will catch him off-guard and you get to see his vulnerable side. Either way, any one of the scenarios above will be plus points for you.

It’s 2019. Men aren’t expected to be our financial providers anymore. If we want equality, then we need to be practice fairness when it comes to money.

Going Dutch on a date removes expectations that would otherwise hinder you from letting loose and having fun. Money leads to control. Some people think that if they pay for a date, a second one is expected. They feel like you owe them something, which could be a makeout session in some scenarios.

How to go dutch

Now, for the tips and tricks in going dutch like a pro. You’ve seen the benefits; it’s time to learn how.

12 Breakup Songs To Get You Through A Heartbreak

Going dutch should be done at the onset and not during the awkward moment when the bill has been placed on the table. It shows confidence in what you want and avoids the other party thinking if you were just hoping to get a free meal because you offered to pay at the last possible moment.

Saying that you want to pay for your share at the beginning will also give your date a chance to respond, which could serve as an additional icebreaker for conversation.

If your date includes other activities besides a meal, then you could offer to alternate pay. You could buy the movie tickets while dinner is on him. This would make things a little easier, especially for those who prefer to pay for everything.

Telling your date that you want to pay your half and that it makes you happy if he let you would lower the chances of disagreement. The point of the date was to have fun and enjoy, so holding back on your wishes would make the guy look bad. If plan “alternate” does not work, you can throw this one in.

Going Dutch is a habit, a manner or etiquette, and it shouldn’t be seen as a big deal. If you make it a big deal, your date will become nervous. This isn’t something like taking a stand against discrimination. Your advocacy shouldn’t come off as too strong because it will only weird your date out. Casually mention at the beginning that you prefer to split the bill if that’s all right with him. This approach is enough for them to realize that it’s a normal thing for you to do and will convince them to say yes.

Here’s the deal with going dutch on a first date – your date might say no. “Hey, is it ok if I pay for my share for this one?” you might offer. “No, no. I’ve never let a girl pay on the first date,” he says. “Oh, but I insist,” you say. From here on, if you push to split the bill, things will only get awkward, and you risk offending your date. If they insist on paying, then you can back down. Instead, you can say, “Really? Are you sure? Ok then, but desserts on me.” Smooth, casual, with a hint for something more.

Going Dutch, or offering to do so on a date is a skill. It is also something that changes with every person, situation and the environment. Above were general guidelines, although the approach and delivery are customizable. Feel free to tweak the tips and tricks and add your own style.

Bottom line, it is advised to offer to go dutch on a date, especially if it’s the first.

Cheers to eliminating the awkward situation when the bill comes!